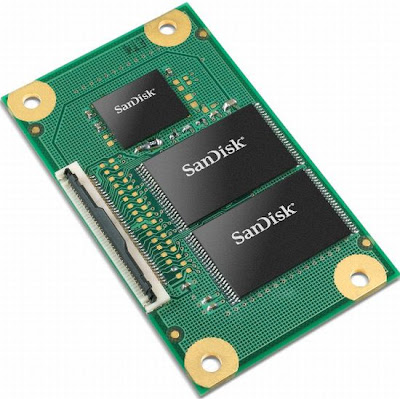 SanDisk Comes With Enriched Data Storage SSDs For Sub-laptops - Gizmo Watch: "We are familiar with sub-laptops and their advantages. Here is some good news for the users of sub-laptops. They will now get enriched data storage solid-state drives (SSDs). SanDisk Corp., the noted flash memory-based data storage cards maker, has launched its enriched storage-capacity SSDs for notebooks. The data storage capacity of these SSDs varies from 4GB to 16GB. It is compatible with both Linux and Microsoft Windows XP OS. Built in line with SanDisk’s Multi-Level Cell (MLC) and Single-Level Cell (SLC) flash memory, the SSDs provide a tremendous read speed of 39Mbytes/s and a streaming write performance of 17Mbytes/s. One of the greatest advantages of these SanDisk pSSD (Parallel ATA Solid State Drive) is that they don’t require a hard disk drive, but can store both the operating system and application data for the netbooks. SanDisk is likely to launch the drives in August.
Via: RegHardware"
Postado por Unknown às 12:23 PM